Report of the conference about the « Arab Springs » organised at Universite Libre de Bruxelles on February 25th, 2015

Actually, the uprisings in the Arab world have been existing for a decade, considering for example the revolts that occurred in 2008 in Tunisia. Nevertheless, a new element has to be highlighted when it comes to the Arab revolts of 2010-2011. The latter were actually interested by a transformation process leading to true revolutions and to the fall of leaders. According to Legrand, these phenomena were predictable, because a boost of education in recent times fueled people’s expectations.

After the explanatory introduction, Legrand highlighted some political issues, which contributed to the rising of the protests. In some countries, such as Algeria and Saudi Arabia governments bought a “social peace” by using financial resources obtained from gas and oil related businesses. In other cases, governments granted favorable treatments to the army and the police in order to keep them on their side. Other countries, such as Morocco and Jordan launched their constitutional reforms. The speaker also pointed out the victory of the Islamist parties during the democratic transition. This factor appears more as a social and political phenomenon than a religious one. For the demonstrators, the Islamist parties were representing strong actors able to solve the economic problems of their countries. Some civil representatives, though, expressed their opinion about the incompatibility between democracy and Islamists parties. Besides, some young people referred to the Islamist parties as the “thieves of their revolution”; they contested the presence of a major gap between the parties’ programme and the young people’s expectations. 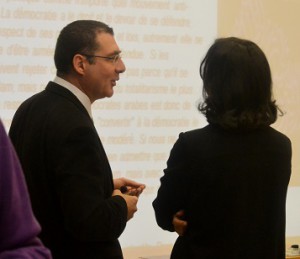 According to Legrand, the success of the revolts can be often explained by the cohesion of the population. For example, the uprisings in Tunisia began in the city of Sidi Bouzid and from there widespread in the whole country. On the contrary, in Syria some key regions like Damascus and Aleppo were sustaining the President Bachar al Assad, therefore they did not support the revolts.

Legrand concluded his speech by briefly illustrating the rising of ISIS. According to him, it is difficult to clearly define ISIS, although at this stage of research it could be considered either as a terrorist organisation or as the willingness to establish a government. In this case, though, it is not sure that ISIS has the means to achieve its objective. It could also be seen as just a criminal phenomenon which hides behind some religious ideals. Some researchers argue that ISIS was born and is acting in a post post colonial period. For example, ISIS boasts of having abolished the borders between Syria and Irak, which were imposed by Europe in the 20th century. ISIS gathers foreigners as well as Sunni from Iraqi baas parties, which have undergone a “debaasification” by the USA. In other words, ISIS can be considered as a consequence of the Iraq war in 2003.

The “Arab springs” are characterised by similarities as well as differences. This is why it would be a mistake to talk about one “Arab spring”. Indeed, each country presents its own features. Some of them experienced the fall of leaders, while others did not.

The intervention or non intervention of foreign powers in this context can be explained by their interests at stake and by the geopolitics of international relations. For example, Russia and China voted against the intervention in Syria.

The “Arab springs” are not over, and the process of democratic transition is still ongoing: democracy cannot be built in a day. 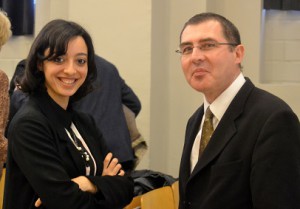