On March 30, 2017 at the European Parliament, European Professionals Network organized a panel discussion on the current challenges of Turkish journalists, lawyers, academicians and civil society members. The event was hosted by MEP Sander Loones. The participants were mostly composed of professionals, representatives of international justice and human rights organizations, media members and reps of journalist and lawyer associations.

Dr. Ugur Tok initiated the panel by giving brief information on the current situation in Turkey. He stated that 7,317 academics have lost their jobs; 4,272 judges, prosecutors have been dismissed; 149 media outlets were shut down and 162 journalists have been arrested since July 2016. These figures are changing on an almost daily basis and subject to constant revision. That means the institutions that symbolize and defend the democratic values are now all crumbled. 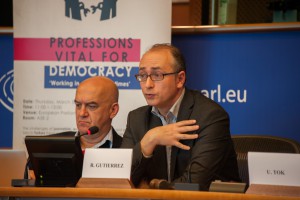 Mr. Ricardo Gutiérrez, General Secretary of European Federation of Journalists (EFJ) stated that they follow the cases of 152 journalists in Europe; 145 of them are currently jailed in Turkey. According to the latest survey of EFJ, %86 of Turkish journalists suspect that they are under surveillance; 83% feel psychological pressure and thus apply self-censorship; 64% have experienced intimidation by political groups. He also states that EFJ, The Council of Bars and Law Societies of Europe (CCBE) and European Association of Judges (EAJ) will publish a joint declaration on the ongoing crackdown on the rule of law in Turkey. (Click here for the full statement) 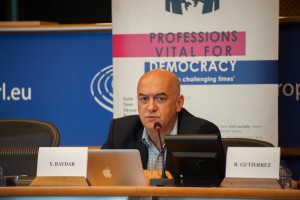 Turkish exiled journalist Mr. Yavuz Baydar stressed that the figure of 150 jailed journalists adds up to 60% of the whole world. This dramatic figure is the highest level ever in the history of journalism. He noted that Turkey entered a historical referendum era with no independent media. The public debates on TV stressing diversity, pluralism of views, exchanging of ideas have all vanished since the coup attempt in Turkey. He indicated that these types of TV programs are essential for the public opinion particularly at times of elections or referendums. Mr. Baydar stressed that the members of the opposition groups are being sentenced to starvation, to a life without dignity. Those people are losing their hope and their desire for life. Because they are being deliberately turned into pariahs, third class citizens regardless of their political color — simply because they are opposition. Baydar also thinks that no matter what result will come out from the referendum, Turkey might end up with a society that turns against each other with the poison of hatred, causing not only psychological violence but also physical one. 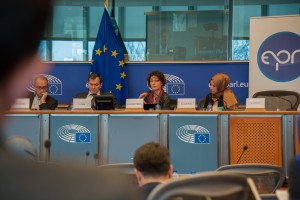 Ms. Judith Lichtenberg from “Lawyers for Lawyers” focused on the role of lawyers on upholding the rule of law. She points out that in many parts of the world, lawyers that take up sensitive cases are threatened, harassed, intimidated, persecuted and subjected to disciplinary sanctions for simply doing their jobs.  Unfortunately Turkey is one of those countries. There are 7 UN principles that guarantee the lawyers’ rights. Out of 7, 6 of them are violated in Turkey. One of them has particular importance in Turkey — that is to discern the lawyers from their clients. The lawyers are accused of the charges — such as terrorism — related with their clients. In 2011, 46 lawyers were arrested and persecuted; they were all the lawyers representing Abdullah Ocalan. In 2016, the lawyers who were representing those lawyers were also arrested. After the coup attempt, the situation got much worse. There are thousands of people in prison. The lawyers have hardly excess to their clients. Some are able to see their clients one hour in a week. It is not possible to have a confidential conversation with the client. All the conversations are recorded, filmed and accompanied with a prison guard. All the documents exchanged with the lawyer are controlled by the prison staff. Just like journalists’ self-censorship matter, lawyers are afraid of taking sensitive cases. Because they know that they will be the next target. 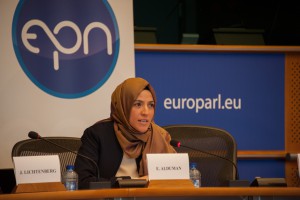 Alduman, president of KYM International, began her presentation by giving brief information on the civil society in Turkey. She stressed out that 1125 associations and 560 foundations were shut down since the coup attempt. She indicated that 85% of the population is not a member of a civil society because they are afraid of to be targeted by the government. The case was similar with KYM Foundation. KYM had the consultative status with the United Nations ECOSOC, was the executive partner of the UNHCR, had 3 million individual donators and 224,000 volunteers before it was shut down by the government. Not only the board members but also the employees of KYM were arrested after July 15. Ms. Alduman also noted that there are around 134.000 civil servants who got sacked and these people are not allowed to work in public sphere or at any job that they can work with their diplomas. This figure increases to almost half a million when you consider the families of those sacked. However the case of detained and arrested people is more critical. There are 50 suspicious deaths and many rape allegations in the prisons after the coup attempt. She also gave the following individual example: A detained high school teacher who was denied to have access to his diabetes medics found dead in his prison cell. She also explained how Turkish embassies and consulates not only refuse to give any service to some Turkish citizens but also confiscate their passports.

In the Q&A section, exiled journalist Sevgi Akarcesme stated that the dictators behave true to type; they oppress people. Her question was why the mainstream media and most of the Turkish intelligentsia use the same rhetoric with the government since it helps enable the language of the current autocratic regime in Turkey and further worsens the situation. Mr. Baydar responded that the problem lies with an ethical dilemma of journalists and it is nothing new. A significant part of the media has always demonized certain journalists or groups, such as Kurds, since the beginning of 80s. What we are going through now is a more severe situation, though. The polarization, political fanaticism, pursuing one’s own self-interest, advocating for democracy only for your own group is merely a sickness. 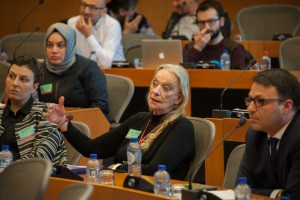 Stéphanie De Windisch Graertz among the participants asked whether the acts of the journalists that mouthpiece the government and propagate its rhetoric are compatible with the core principles of journalism and whether it is accurate to call them as journalists. Mr. Baydar responded that there are four criteria that define journalism: freedom, independence, safety and pluralism. Propagandism falls inside journalism according to this definition as freedom of expression is the bedrock of the freedom of the media. So propagandism can be compatible with journalism only when pluralism exists. But in the case of Turkey, diversity and pluralism are severely damaged because the “independent” segment has disappeared to a large extent. So the pro-government sources dominate the mass media. 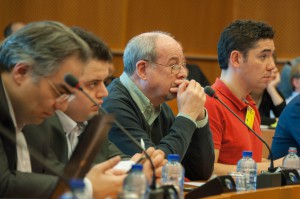 Another question from the audience was why the European media doesn’t write or speak enough about Turkey. Mr. Baydar told that the high priority is to show solidarity with jailed, fired or persecuted journalists. And many of the western European media such as Belgian, Dutch, German, Scandinavian, Italian and Spanish media are aware of the situation enough to report about it. Also many organizations such as EFJ, CPJ, Reporters without borders etc. have been campaigning about Turkey for months with petitions, visits, conferences in and out of Turkey. They have been doing enough, but the situation in Turkey has hit the wall. As a possible solution, he suggested that let’s say if the city of Ghent adopts one jailed journalist in Turkey, the city of Amsterdam adopts a jailed Kurdish journalist and another German city adopts a Gulen-affiliated journalist, this symbolic act would lead to a social awareness of the situation and bring it to the attention of the local media and thus the civil society members. Declaring him/her as “Honorary Citizen” would make a huge impact in the international media.

Taken together, the picture emerging from the comments drawn on firsthand experience and expert remarks is that Turkey is moving away from its century-old democracy. The main takeaway is that all the segments believing in democratic values, rule of law and human rights should unite their voices and work together against the ongoing oppression, autocratic and unlawful practices. Professionals such as journalists, lawyers, academicians and civil society members play a crucial role in shaping a healthy democracy and thus they are to be protected no matter how. 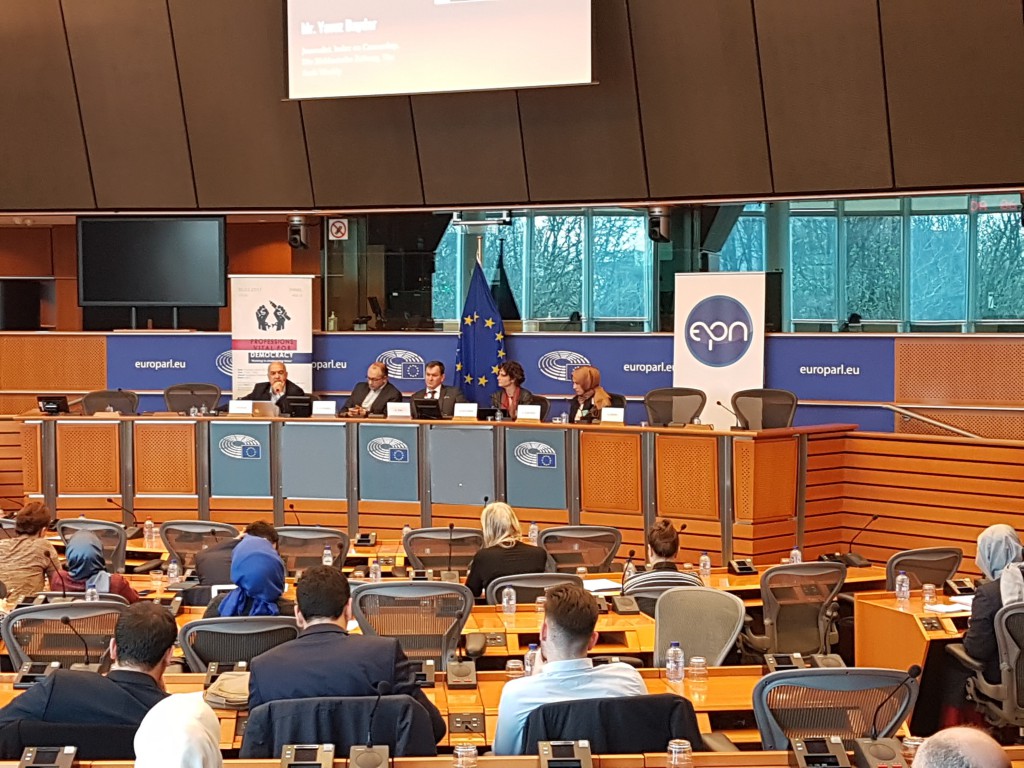